HomeTravelCajamarcaExcursion to the Windows of Combayo, old cemetery in Cajamarca
Cajamarca Travel

Excursion to the Windows of Combayo, old cemetery in Cajamarca 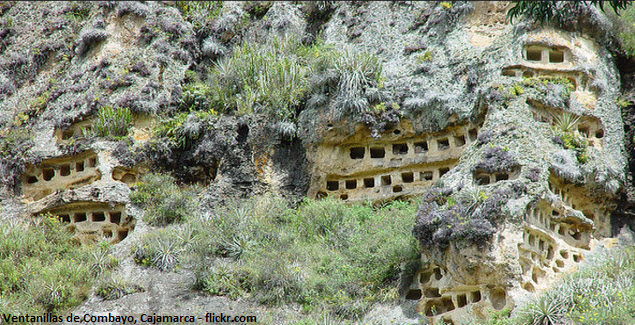 The oldest cemetery in Peru are «The Windows of Combayo» also called «Combayo The Necropolis», with more than 3500 years old and located at an altitude of 3000 meters above sea level in the Cerro San Cristobal in the region Cajamarca.

This necropolis or group of funerary structures, is made up of square or rectangular cavities carved in rock, very similar to the Windows of Otuzco, but in better condition, although less known to be more distant from the city.

They are hundreds of niches belonging to the culture of Cajamarca and can be observed from a distance like a mound of great elevation in the presence of shrubs and grasses, also part of the route called Capac Ñan or «Great Inca Trail» which runs nearly all the Central Sierra.

As for its architecture, its buildings are settled on the slopes of Cerro San Cristobal, where there are niches dug into the rocks as a row and then carved.

According to studies, the funeral rites in Combayo included pre-cleaning of the bones of the dead, implying a transfer of the remains. Today one can see some bones within certain niches.

It is recommended that a visit to this site is performed on excursions and in the morning, because in the evenings the area is cold and there is no transport.

The Windows of Combayo is 35 kilometers from the city of Cajamarca, in the district of La Encañada.

The Windows of Combayo in the following video, where you can see the curious constructions that made these people of Cajamarca in that place: