HomeBlogTravelCuscoKenko, one of the most important shrines of the Cusco
Cusco Travel

Kenko, one of the most important shrines of the Cusco

An archaeological site in the Sacred Valley of the Incas in Cusco is Kenko, also called Qenko, which comes from the Quechua word Q’inqu, meaning maze, as it is associated with zigzag channels carved into rock and have served the priests, to pour the sacred chicha, which they drank during the sacrifices. It is located on the Socorro hill and covers an area exceeding 3,500 square meters.

Its original name is unknown, since Q’inqu was placed by the Spanish conquistadors. It has been described as an amphitheater with a semicircular construction. Although the purpose of its construction is unknown, it is believed that it was used as an altar, a court or a tomb.

Also, it presumes that Kenko has been one of the most important shrines of the empire, a center dedicated to the rite or where they worshiped the sun god Inti and Pacha Mama, or Earth goddess. Thus, the Inca’s predilection is highlighted in stone and care they had in their carved. 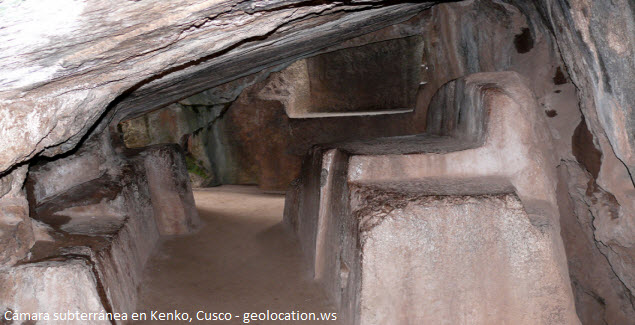 It is located since Sacsayhuaman until Pisac. It comprises:

The amphitheater: was a temple for public ceremonies, with a semicircular area of ​​55 meters long, with 19 incomplete niches along the wall. We can see a large stone block of 6 meters high on a rectangular pedestal, which would have been a sculpture and a rocky proyection that has a passage leading to rooms, a complex of terraces, an underground room and a system of drainage canals.

The carved stone: from here there is a staircase carved in the rock and leading to the summit, with carved figures that would be a condor, and from here comes a small canal in zigzag.

Intihuatana and Astronomical Observatory: you can see in a polished rock with two cylinders of short height. It is not known until now how it works, but presumably it would have been to measure the time, solstices, equinoxes, seasons and worship their gods.

Cusilluchayoc: It is located 500 meters east of Quenco Large and includes a stone carved two meters high with form of a frog and snake reliefs and monkeys. Its name is a Quechua word that means «temple or place that has monkeys».

The underground chamber: It was a place of worship and hidden secrets and rituals. It has walls, ceilings, floors, tables, niches, rooms and platforms and channels for the evacuation of rainwater.

The zigzagging trough: located in the Intihuatana and it thinks that the liquid was the blood of humans or animals slaughtered to worship to the gods.

The mortuary: a subterranean chamber could have been used to embalm dried apricots and likely, the human and animal sacrifices were ocurred there.

Located 350 kilometers to the west. It is very destroyed unlike of large Kenko, with high walls and carved same.

Kenko is 6 kilometers from the city of Cusco.

Learn a little more about Kenko and pay attention to the explanation that makes the tour guide in this entertaining visit.

Sacred Valley of Cusco is seen from capsules on high

Tipon would be one of the royal gardens of Cusco

What you need to know before going to Machu Picchu?