HomeBlogTravelIcaKnow the mysterious geoglyphs near the Nazca Lines
Ica Travel

Know the mysterious geoglyphs near the Nazca Lines 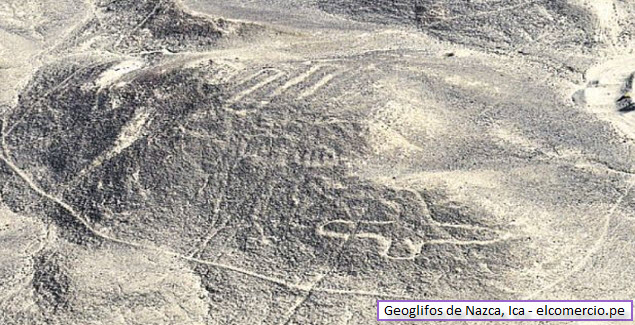 Two dozen geoglyphs were found about a mile north of the city of Nazca, in Ica, south of Lima, dating back two centuries before images that are part of the Nazca Lines as the famous monkey, the spider and hummingbird (between the first century BC and the fifth century AD), which are Unesco World Heritage.

These images, which represent native Andean camels and llamas, are in an almost invisible surface, which were discovered thanks to the 3D scans that were performed in a plant of a mile, by researchers at Yamagata University in Japan.

According to team leader, Masato Sakai in an interview with Discovery News, the newly found geoglyphs were made with a different technique to famous Nazca lines.

While the lines are on a surface that is compound by a layer of pebbles of a dark reddish color caused by oxidation, removes it and after emerges another layer of a color yellowish; recently discovered figures were made by the Nazca people, who removed the stones from the surface in the shape of animals, and the white ground filled their bodies.

This is a very important discovery, because there is nowhere else in the Nazca plateau with such a large concentration of geoglyphs, because there are 17 more in an adjacent area, and with the danger of being destroyed by the recent expansion of urban areas without being recognized as geoglyphs, according to Sakai, who recommended that it is important to share information with local people and government for their conservation.

Then in the following video, the Nazca Lines where the creation theories are explained:

Visit the most important vineyards of Ica