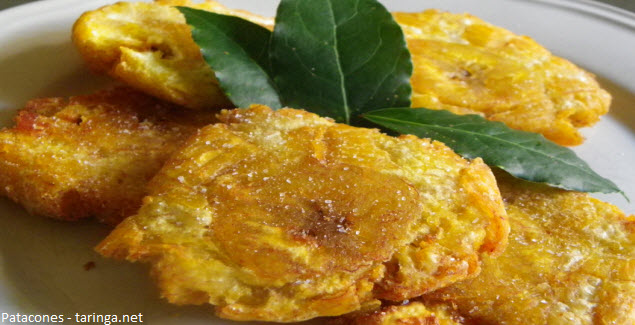 There are many delicious dishes that stand in the Peruvian jungle, but among the most requested by diners are Patacones, whose preparation technique is very similar to what is done to the jerky.

This famous dish for our Amazon is made from green banana giant size, popularly known as «mature» and are mostly consumed.

They are prepared in fried whole wheels, mashed and refried that can daub with a series of ingredients that makes it a suculante porridge.

According to Wikipedia, the word comes from the colonial currency patacón of the same name and is called «tostón». It is popular in countries like Ecuador, Colombia, Venezuela, Honduras, Panama, Nicaragua, Puerto Rico, Cuba, Puerto Rico and Dominican Republic.

And although in recent years, the plantains are quite popular both in northern Peru and Bolivia, it is not a traditional dish.

How to prepare Patacones:

Firstly bananas are peeled with a knife, making a longitudinal cut, remove the strands and cut into chunks.
Meanwhile, in a skillet heat a little oil and fry these pieces of bananas until golden. Let them drain.
Crush them in a table and form the plantains. Add the garlic and season lightly.
Again place them in the pan and fry until golden. Finally, drain to remove excess fat and serve.

In the video we see below, another way to prepare Patacones, who happens to be a good accompaniment to Cecina.

Recipe of «Choritos a la Chalaca», typical dish of the port of Callao