HomeBlogTravelPunoDid you know there was a Spanish prison in the middle of Lake Titicaca?
Puno Travel

Did you know there was a Spanish prison in the middle of Lake Titicaca? 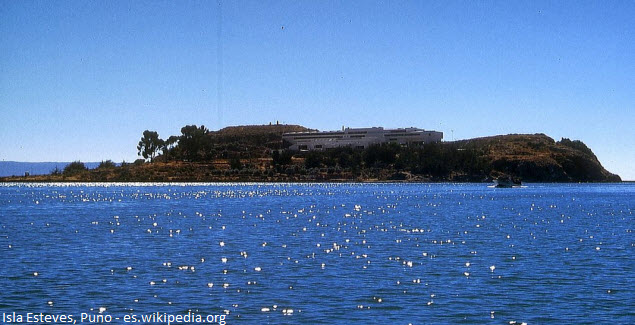 Near the town of Puno and in the middle of Lake Titicaca, is located an island that served in prison at the time of Independence. This is the Esteves Island, also known for its archaeological remains.

Quite apart from using the dungeons of the Real Felipe Fortress in Callao by the realists, in 1826, they decided to confine the patriots imprisoned in the Esteves Island for being a place away from the front main of war .

This realistic prison during the war of independence, at 3,800 meters above sea level, was in the midst of a healthy climate despite the icy waters of the lake, which was a real obstacle to any attempt to escape.

The prisoners, who surpassed one hundred, enjoyed freedom of movement during the day, but at night were locked and poorly nourished. Most of them belonged to the liberating army who were captured during the war, including the Argentine general Rudecindo Alvarado and future presidents of Peru and Bolivia, Jose Rufino Echenique and Jose Ballivian.

And after the battle of Ayacucho in 1824, all were released with the revolt of the realistic garrison of Puno in favor of the patriots and proclaiming as its chief, general Rudecindo Alvarado.

Many years later, in the 1970s, was built the only hotel that exists on the island, known as Hotel Libertador Lake Titicaca.

In April 2015 a march was held by the Puno people along with the mayor and institutions in the area to recover the island that became privately owned by the said hotel. Finally, a meeting between authorities, leaders and representatives of hotel, agreed that everybody can walk around on the Esteves Island, carrying an Identification personal. Later, will continue discussions to finalize all outstanding agreements.

The island is located just 5 minutes from downtown Puno. To access the island is necessary to make a boat trip across the lake.

In the video below you can see the Esteves Island on one side and the hotel that was built in this place:

Molloko, archaeological site of the old elite high in Puno