Antacocha lagoon, natural reservoir in the heights of Lima 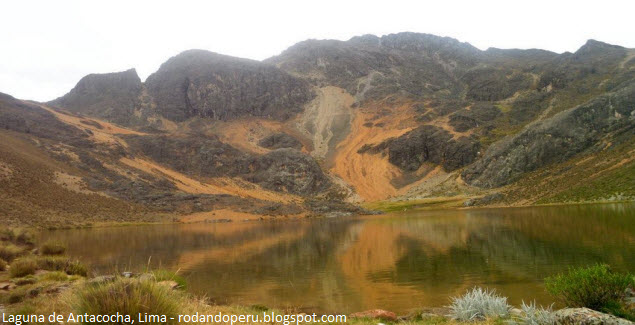 In the limit of the province of Canta, we can see the Antacocha Lagoon, with 3 hectares and 10 meters deep, with the shape of a bull if it is seen from the top of one of the hills surrounding it.

Antacocha means «Laguna Copper», according to the people of Vicas. The hills surrounding the lake have also given the shape of a lizard and a snake. In turn, one of the hills has the shape of a man who appears to be contemplating the lagoon and has been called «The owner of the lagoon», by the community of Vicas.

Among the flora that surrounds, it is the ichu, which is used as feed on natural pastures, and also wetlands that are wet rooms with vegetation to the ground all year. Among the fauna, there are a variety of birds like pukupuku, woodpecker, condor, the huallatas, among others.

In this place stands out a reservoir a preinca dam (between 1100 and 1400 AD), built by the inhabitants of the chiefdom of Vicas. Its gates are staggered and they are made of carved stone and with cavities that allow drainage of the water, through irrigation channels for distribution during drought.

The villagers usually do each February 8, the traditional «tapada de la laguna» (mean «covered lagoon») which involves covering the windows of the lagoon dike and so serves as a water reservoir. In mid-July is performed the celebration of the Champeria, when these windows are uncovered and thus the water flow through the canal and irrigation channels.

Another festivities is the typical dance of Vicas called «toro calachito» (mean «calachito bull») by the shape of a bull that has the lagoon, a dance that every February 8 is danced by men Vicas and ending with the «tapada de la laguna».

In 1997, Antacocha lagoon was declared a cultural heritage of the nation by the National Institute of Culture, because it gives sample of a hydraulic system of the pre-Inca unique in its kind. This dam is known as «the 14 windows.»

Currently, this lagoon has permanent maintenance through community Vicas.

Antacocha lagoon is 14 kilometers from the community of Vicas in Huachupampa district in the province of Huarochiri, Department of Lima.

Antacocha Lagoon is shown in the video below and where you can appreciate the beauty of your water mirror and the nature that surrounds it.