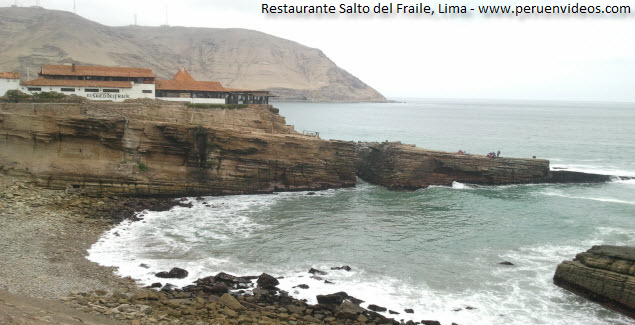 A restaurant in Lima with a privileged view is the «Salto del Fraile» (Jumping of the Friar), located near the Morro Solar and the beach La Herradura, where visitors can enjoy Peruvian cuisine, while appreciating an unforgettable attraction.

This attraction takes place every Sunday, where the friar throws himself to the deep sea, represented by a person dressed in Franciscan robes, throws himself into the sea from a cliff located next to the restaurant.

Legend has it that in the 1860s, the Marquis of Sarria and Molina had a daughter named Clara, who grew up under the care of his Evarista nanny who had a son named Francisco, three years older than the girl. Time passed and the love of both was born and grew to the point that Clara becomes pregnant, sparking an upheaval in society at that time.

The Marquis angrily, ordered to enclose to Francisco in the Convent of La Recoleta and he would be monk, while her daughter would travel far. After one month, she left from the port of Callao, while Francisco expected from the Morro Solar. Clara would know by his nurse that her beloved would be there, so I looked through the use of a telescope.

Suddenly, she saw him standing on the highest rock with a mantle over his head and shaking in the air. After one minute, the priest rushed into the abyss and could only it appreciate his robes floating like a funeral flag.

Clara could not bear to see such that scene and immediately she jumped into the water, converting this story in a legend, that spread throughout Lima and in memory of that misunderstood love, was built near, the restaurant called «El Salto del Fraile».

In the video below a person dressed as a monk repeats the legend and jumps to sea off many persons: