Sanguito, culinary delicacy that is sold in the streets of Lima 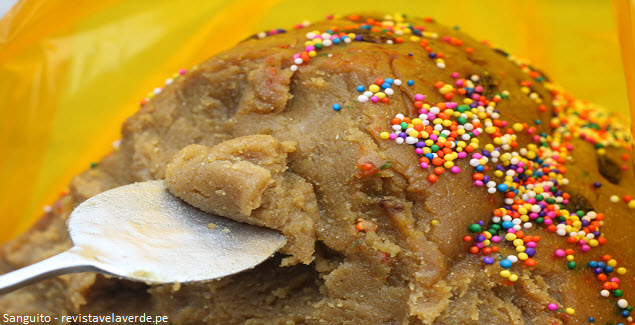 A dessert with a lot of tradition is the «Sanguito», although it has lost some presence in the Peruvian table as it is not easy to find a place to taste it, as occurs with sweet known as «Arroz con Leche», «Suspiro a la limeña» or «Picarones».

This sweet, made with corn flour paste, oil, vanilla, cloves, anise, cinnamon and sugar, raisins and adorned with colorful dragees, originated in ancient times, but Sergio Zapata Acha, in the dictionary Traditional Peruvian cuisine, said the sanguito has been consumed since the colonial times.

One of the first authors to refer to this dessert was Ricardo Palma, who said the salguito is «popular dish made of cornmeal, a kind of porridge with sugar and raisins.»

Meanwhile, Nathalie Otarola in his article «sanguito: delicacy made tradition» Black people were accustomed to roast and add pig butter to your food for having a better taste, is how it appeared sanguito.

In ancient Lima, desserts could not reach the diner without the intervention of the criers, because it is they who sold sweets growing its fame. These vendors accustomed place a cushion over his head and over the tray with this traditional dessert.

But over the years, this tradition has been lost and are increasingly selling fewer sanguito, a sacrificed work to carry great weight in the head that can damage the spine.

The sanguito is a dessert, which may seem difficult to do, has an easy preparation and in the following video will be shown like you can do at home: