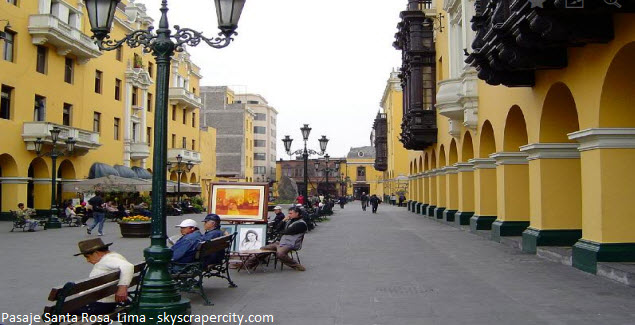 On the side of the Municipal Palace of Lima we find an urban space which has been called for over 20 years as the Pasaje Santa Rosa, place where a monument that perpetuates the memory of Taulichusco was erected.

This passage was begun in the 40s, but as first idea for being the grand avenue Santa Rosa to connect Plaza de Armas with the first block of Avenida Tacna, had also planned the construction of the basilica Santa Rosa.

However, the corresponding technical studies conducted, they found that between Camaná and Caylloma shreds is located the house of the hero Francisco Bolognesi Arica, declared a national historical monument, so the work stopped.

So that architects Rafael Marquina, Hector Velarde and Jose Garcia Bryce considered not continue opening the avenue, which had also distorted the urban area of ​​Plaza de Armas, which was initially conceived as an enclosed space.

This area is then baptized the passage Santa Rosa and was in principle the municipal parking. 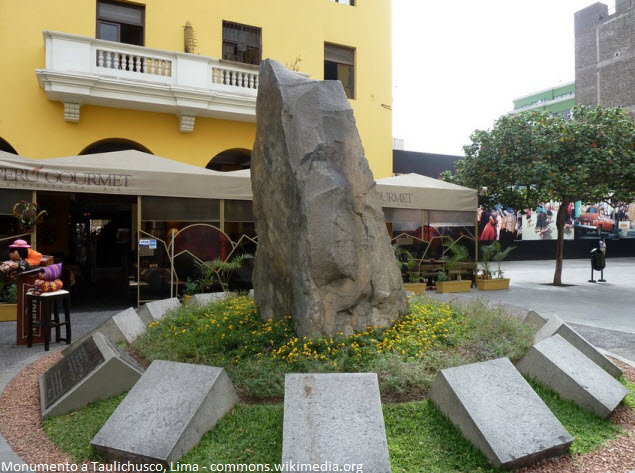 In 1985, it was erected a monument in his way which perpetuates the memory of Taulichusco «El Viejo», who was the last Lima curaca, when the Spanish arrived in 1535. This historic cultural legacy is an enormous rock type Wanka granodiorite, a stone Andean basal opened in the 450th anniversary of the founding of Lima.

When the Spanish arrived in Lima, the old curaca did not fight, he knew since they were in the Tawantisuyo who plundered everything they found, so was a collaborator and courteous, with intent that they don´t dominate to his people.

But very little served this desire that the dignity of its people were respected, those who remained in the city were subjected to become yanaconas then occurred bloody events in the struggle to defend their territories until ended with the murder of Taulichusco.

Pasaje Santa Rosa is among the shred of the Union and the shred Camama, in downtown Lima.

In this video can be seen all the way of the Pasaje Santa Rosa, its around and in the center, the monument erected in memory of Taulichusco, represented by a large stone.