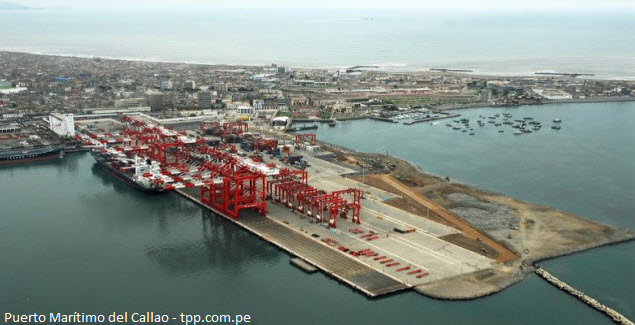 Officially, the Puerto del Callao located in the central coast of Peru, is the main port in both traffic and storage capacity. It has a depth of 16 meters, allowing for huge loads.

In recent years, the port has been growing for the investments that have been made through products of concessions.

Currently, there are five springs called 1,2 3, 4 and North, which are breakwater type and direct docking. These springs are specialized for containers, bulk and multipurpose.

It also has eleven depots a variety of areas, eleven areas of containers and five courtyards for them. There is also a closed grain store, cranes that facilitate the transfer of heavy loading, among others.

The terminal is connected to the industrial zone of Lima and around the country, as well as the Jorge Chavez International Airport and the Central Railway that crosses the Andes.

Meet modern electric cranes, which were acquired for the modernization of the port and faster loading and unloading of containers in the following video: