Walk Sáenz Peña, shows of the architectural creativity in Barranco 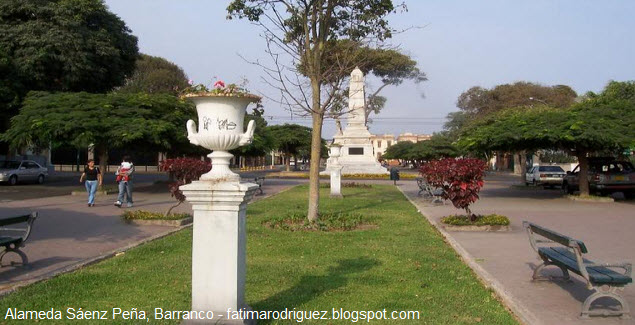 One of the places with a variety of architecture and spectacular views of sunsets over the vast sea is the Alameda or Paseo Sáenz Peña in the Lima district of Barranco.

Its construction was in those times where there was creativity and good taste, inaugurated in 1912 by then Mayor Don Aurelio Souza.

Here stand houses or mansions with Gothic European influence, such as the Embassy of Spain reasons, Dasso Valley house, the house of Colegio San Julian Sage Muzzo Gustavo Pons, among others.

On the other hand, there is a story behind the obelisk in honor of the Argentine liberator Jose de San Martin, a work of Rosello which initially was located in the Park of the Exhibition, replacing the Columbus monument which was eventually moved on Paseo Colon . This obelisk was crowned by an angel of victory, he moved to Barranco in 1922 and ended in Bolognesi Avenue before it was destroyed by an earthquake in 1940.

Today this Alameda is surrounded by art galleries and a variety of cultural shows such as theater mocha Graña.

In the video below the buildings they were and are part of the Alameda Saenz Peña which each one contains a story.